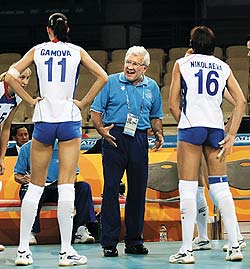 Reading this interview with famous Russian women’s coach (and dual Olympic gold medallist) Nikolai Karpol inspired me to head for the bookshelf and pick up my copy of his book to give it a quick reread.  Every volleyball coach and player should have a copy of this book.  Not because it’s a great book, but because it is one of only a handful of volleyball books / biographies written in English.  Probably because he was interviewed in Russian, the book was written in Croatian and it was translated into English it isn’t a really easy read.  But it is a decent insight into one the great coaches and it does have quite a few really interesting points.  For example…

“Young girl players, and the same is true for men, need to get involved in training with older players as soon as possible, for they will then be able to put together the little stones of the understanding of the game into a mosaic.  It reminds of the many little pictures that make up a film.  Even by just watching the best players, those they admire, young players can learn a great deal.  Not to mention training with them.

At the age of thirteen a talented child, by training with adults can learn in two weeks what she would need a year to learn by working with her peers.  This is no exaggeration.  it is therefore necessary periodically to organise combined training sessions for seniors and juniors.  In this way the players, apart from technique, learn stability.”

Every (ex-)player I have ever spoken to on the topic agrees wholeheartedly with this experience supported, entirely logical* and scientifically supported**, notion.  And yet much talent development continues to ignore this basic principle.  Of the countless reasons why holding (Australian) National Junior Championships for all age groups simultaneously is a bad idea, one of the biggest is the negative impact on individual player development.  Previously players were able to play with, or at least try out for, older age groups thus accelerating their development.  Under the current system I have even experienced talented players being forbidden from playing with players older.

In Germany it better, but only a bit.  Talented juniors are concentrated into development groups of the same age group.  They remain in these age groups until they graduate from junior ranks having never, or hardly ever, trained with anyone older than them.  To compound the situation, while they participate in adult competitions their results don’t count; they can’t play playoffs, they can’t be relegated.  So when they reach the ‘professional’ level they have played only a few actual competitive matches and have rarely even had to compete for a position.

Karpol would be shaking his head.

* Practicing with older players provides a more challenging environment (i.e. one required for deliberate practice) and older players are able to share invaluable experience, particularly in the area of game understanding.

** Bruce Abernethy of The University of Queensland has researched this very topic, here, among other places.