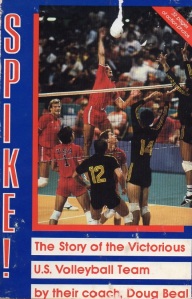 There is a famous American sports journalist named Bill Simmons.  He wrote a huge book about basketball named ‘The Book of Basketball‘ (actually about the NBA) that became a best seller.  Because 90% of the book is about events and players that most readers have only ever heard of, an enterprising fan put up a webpage with youtube links to many of those events and players, an interactive guide, if you will.

There is a famous American volleyball coach (and administrator) named Doug Beal.  He wrote a book about volleyball named ‘Spike!‘ (actually about the 1984 Olympic gold medal winning volleyball team) that hardly anyone bought and is now out of print.  Because I believe in preserving volleyball history and because more and more clips are starting to pop up on youtube (and because it took about 10 minutes to do) I have created an interactive guide for ‘Spike!’.

Needless to say if you have any relevant clips that add to the narrative, I will be happy to add them.

“It was the United States vs Cuba, and they were smug.  After three close games, we led 2-1.  Then we made some subs that changed not only the tempo of the match, but our outlook on who should be playing for us more regularly.

Berzins and Smith went in, giving us a small lineup, but one that we won easily in four games.  The small lineup seemed to be a workable alternative to the usual big-guys-only look.  Part of developing a team is finding out who can play, where, and which combinations work best.

Hovland was named the tournament’s MVP.  It was the last match he would play for the United States.”

“…we went to the Soviet Union for matches on May 8, 10, 12 and 13 Kharkov.  The arena was good and so was the weather.  It was a nice situation for us.  The Soviets were huge and powerful, but also predictable, we thought.  Most important, our team believed in its new system and in our ability to win.”

“The boycott, though, was about to be announced.

During that final game, it was obvious something was wrong.  It didn’t appear the Soviets were playing any differently, but it seemed some of the usual fire was taken out of the coaching staff.  I think the staff was told of the boycott before that final game.” 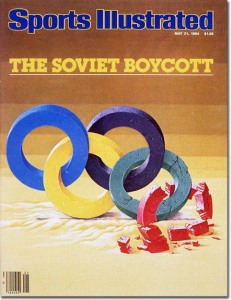 “Little time was left, but we continued playing matches to stay sharp.  We staged a USA Cup Tournament in San Diego in front of some strangely paltry crowds.  Maybe people were sued to us winning too much or perhaps the Olympics were just too close, but the tournament didn’t draw well.”

“I was happy to be playing a match finally – we were the first US team to play – and I played everybody.  We wanted all our players to have an Olympic experience right off the bat, and if we lost a game in the process, that was all right.  Even if we had to go to five games against Argentina, we felt comfortable we’d win with no problems.

The match went four games, with Argentina winning the third.  The scores were 15-6, 15-7, 10-15, 15-8.  Powers struggled a bit, having trouble with his approach rhythm, so we pulled him.  Later in the tournament he came back to be awesome.  Timmons was overwhelmed emotionally, and Kiraly was screaming and got a little carried away at some of the other players’ mistakes.”

“The match took place on August 6.  We kept Sunderland and Salmons in the starting lineup, and as the match progressed, we used everybody on the bench.  But nothing we did could change the tenor of the match.  Brazil played great; we played poorly.  Kiraly hit minus 23 percent, his single worst percentage in four years.  We had problems receiving their power serve and purposely made no effort to block it, a change we had made for the gold medal match.  We did put Powers back into the lineup in the middle of that first match with Brazil, and he was spectacular in the rest of the Games.”

“We beat Canada quite easily, 15-6, 15-10, 15-7, although they did get ahead in each game.  We passed fantastically well, but we didn’t block very well.  We never got aced, which is amazing.  Kiraly and Berzins passed almost perfectly and just about everyone played a fantastic match.  None of the games even went five full rotations.”

“We had our rotation down. We had our setting tendencies down, our passing down.  Our matchups were perfect.

We made one key change that worked well.  We changed Berzins’ blocking assignment.  In our first match with Brazil, Aldis had no stuffs and the team only nine.  In the gold medal match, he had four stuffs, the team had 13.  Berzins set the tempo in the first game with three stuffs.

Brazil got only 19 points.  In the first two games of our first match with them, we had 92 rotations and 115 for the entire match, but this match took only 73 rotations.  We handled their spike serve by putting a blocker in front of it.  We had an attack efficiency of almost 50%.  We had a 60% kill ratio.  Buck made no hitting errors and was an intimidator.  Timmons was great from the back row.  Powers and Timmons had carried us in our final two matches and couldn’t have been any better, especially.”

“Later we had a fabulous party back at the hotel.”

“The USA goes to this tournament and answers the critics of the boycotting countries.  We crush Poland and Bulgaria, lost a tight match to the USSR, and along with the Soviets dominate the field.  (We are, of course, without half of our Olympic team***).”

And an article in Sports Illustrated.