When Yasutaka Matsudaira was named as coach of the Japanese men’s volleyball team they had just won the bronze medal at the Tokyo Olympics.  That appointment was the first step of a process that led to the Olympic gold medal in 1972.  Along the way he helped revolutionise the way volleyball was played and prepared for.  As luck would have it, he wrote the story of the journey AND someone translated it into English. 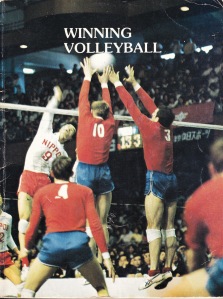 The book was written before this team’s finest hour, the Olympic gold medal in Munich in 1972.  The following You Tube clip seems to be a documentary of the semi final match against Bulgaria that they won are fighting back from 0-2 and then 3-9 in the fifth set.

Some of the players and personalities talked about in the book can also be picked out of the videos from the 1966 and 1970 World Championships that have been posted on by the FIVB on their You Tube channel.

PS  I apologise for any copyright infringement.  I checked to see if it available online and it doesn’t seem to be available anywhere.