With a little extra time on my hands I have taken started to look at what might be the differences and similarities between leagues, and with it whether there are any structural ‘rules’ in volleyball. Thanks to Michael Mattes and Manlio Puxeddu, who collected the files and Ben Raymond, who wrote the apps that let me crunch the numbers for the whole leagues. The leagues I will focus on are France, Germany, Italy, Poland, and Russia. For these leagues, I have almost full data for the 2016-17 season and I also think these are probably the top 5 leagues right now.

Everybody knows that the team that makes the least errors wins.  It is one of the great truisms of sports, handed down to us from time immemorial by the great coaches of history.  Following this immutable, dare I say conventional, wisdom, innumerable coaches in countless sports all of the world daily exhort their charges to reduce errors.  Everybody knows this to be true.

But do they actually know this?  To my knowledge, nobody has ever tested the hypothesis that reducing errors leads to more wins.  And EVERY (ok, most) sport counts and decides their results based on points / goals / games won.  No sport is decided by adding up the errors avoided.  Surely on this basis alone we have reason to question the conventional wisdom.  And you know how much encouragement I need to question conventional wisdom.

Some time ago, I started working with a number that adds total errors and points, using a ‘per 100 points’ scale.  The details of that are here, but simply I group all unforced errors (serving, setting, attacking, net touches in block, free ball reception errors) on one side and won points (serving, attacking, blocking) on the other.  The ‘per 100 points’ scale was chosen due to pointlessness of using totals or per set totals and the difficulty in using percentages of total actions (the actual number of actions that end rallies is very small).  I have followed this statistic for over a year now and I did some correlations in the top 5 leagues.  What have I found?

ERRORS AND POINTS PER 100 POINTS 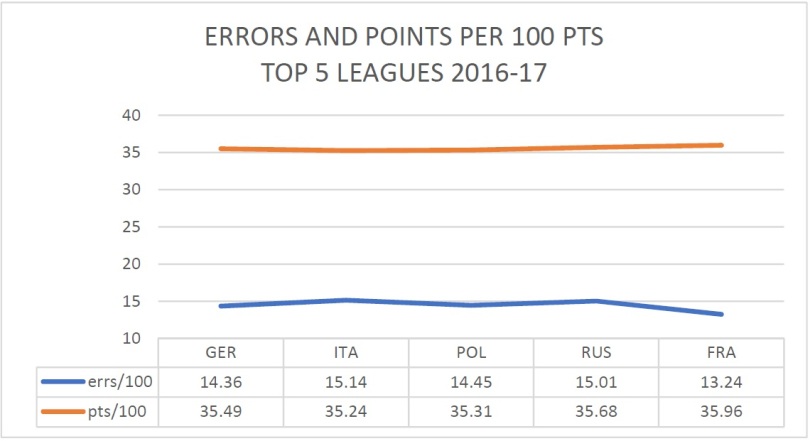 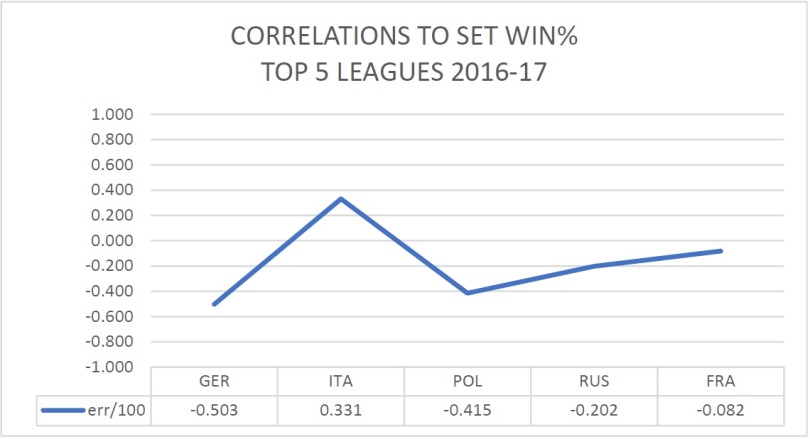 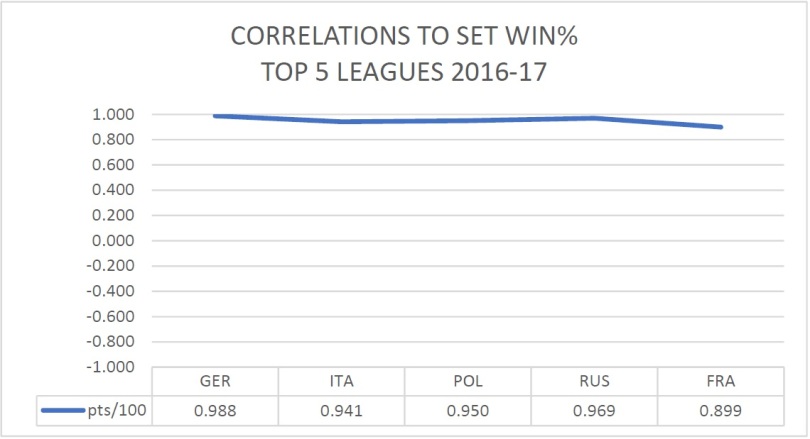 When we look at correlations between points won and set win percentage we see a very strong correlation, in every league.  The figures are so high that there is not really any discussion to be had, scoring more points makes more likely to win.

The conventional wisdom is that by avoiding errors you give your opponent more chances to make errors themselves.  Using the same argument, by avoiding errors you not only give up chances to make points for yourself but you also give your opponent more opportunities to make points.  As always, everything is perspective and statistics themselves are only one perspective.

One thing is clear, avoiding errors ALONE is a poor strategy.  Errors are not a problem as long as they are in the service of making a point.  And scoring points is the name of the game.